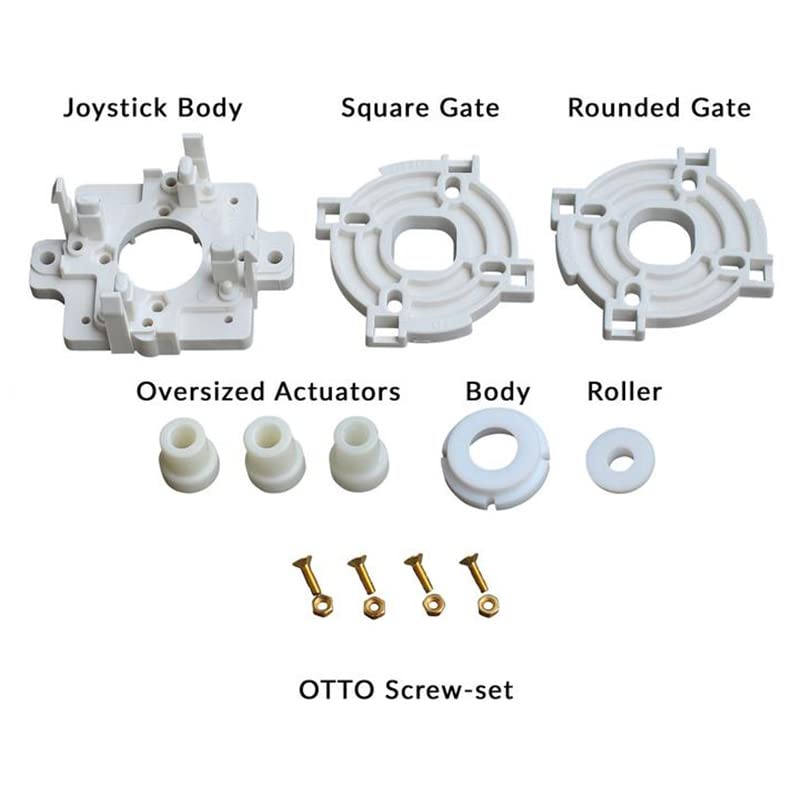 WHAT’S INCLUDED IN THE V5 KIT?

*FD Replacement Square Gate – This replacement square gate has a rounded area around the corners, allowing the top portion of actuator to sit comfortably while still defining its corner.

*BYD Replacement Rounded Gate – Those desiring an octagonal gate may consider this a worthwhile alternative. The gate increases the rounded edges around the corners, producing a more circular feel during play.

*12mm, 12.5mm, 13mm Oversize Actuators – the actuator is used to activate each microswitch plunger, with the 12.5mm and 13mm actuator designed to shorten the distance between the actuator and the plunger and speed up actuation.

*Pivot Core – The pivot core is made of a smooth teflon material and connects to the modular body. This is swappable with the V2 Korean style grommet core.

*Pivot – Also made of teflon, the pivot sits inside the V5 pivot core. It accomodate your Sanwa JLF or Hori Hayabusa joystick shaft and replaces the existing pivot in each respective lever.

*Screw and Nut Set – gold plated screws replace the existing screws used to mount the Sanwa P-1 plate or Hayabusa plate. To install the screws, you will need a 2mm hex key.
“OTTO DIY Kit V5 – Japanese Version”, made by OTTO DIY, is a very high quality product kit that will transform the normal Sanwa JLF to a joystick that feels extremely smooth, reduces throw and increase the feeling when doing 360 movement. Basically this is what the ultimate JLF would feel like.
OTTO DIY made each major plastic component of the kit out of Polytetrafluoroethylene, or PTFE. It is commonly known as Teflon. Not only does this material give the kit components their unique color, but significantly reduces friction on components that must interact with each other. For example, the pivot and pivot core of the OTTO DIY kit will hardly need greasing, producing nearly fluid directional control.
Package include: Modular Joystick Body, FD Replacement Square Gate, BYD Replacement Rounded Gate, 12mm, 12.5mm, 13mm Oversize Actuators, Pivot Core, Pivot , Screw and Nut Set